PITTSBURGH (KDKA) ― Pittsburgh Bishop David Zubik says he isn't telling anyone who to vote for in the upcoming presidential election but at the same time he says the teachings of the Church are clear and that Catholics should be guided by one over-arching concern – the sanctity of human life. 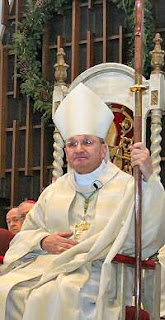 These are complex and tumultuous times and with the wars raging overseas and the economic collapse threatening the home front, Bishop Zubik is urging Catholics to turn to their God and their church to help them sort it all out.


"Take a look at the issues. Take a look where the church is on them. Pray about it, and make your vote," Zubik said.


Most of us are concerned with the economy. But while we fret over a looming recession and our tanking investments, the bishop wants Catholics to refocus on other issues.


"The Pope has said you know we're so concerned about financial bankruptcy but maybe the question that we're missing is that perhaps we're becoming spiritually bankrupt."


And in considering the issues, the bishop says one should take precedence over all others.


"The one issue that can't be minimized is the issue about being pro-life."


For Zubik, pro-life does not simply mean anti-abortion. It can also encompass a candidate's position on war, poverty and the death penalty.


But he says they are not on par with the Church's belief that life begins at conception and that together with euthanasia, Catholics must first and foremost consider a candidate's stance on abortion.


"The Catholic Church teaches these are intrinsic evils because they go absolutely, directly against the mind of God," Zubik explains.  "And when you take a look at those two issues, you're looking at two issues where the absolute end result of each of them is snuffing out a life."


But about a candidate or even a Catholic who consider themselves pro-choice?


"I can't speak for those persons but I don't know how that individual would be to weigh that and to say well that they're being faithful to the truth."


And still, while McCain is pro-life and Obama is pro-choice, Zubik will not endorse a candidate nor tell his flock how to vote.


Nor has he followed suit with Bishop Martino of Scranton who has said he would deny communion to pro-choice VP candidate and Catholic Joe Biden.


Sheehan: "Would you deny a Catholic politician who identifies him or herself as pro-choice -- would you deny?"


Zubik: "The role that I see that I have is to be a teacher and to help everybody understand what in fact is the truth," he says, "and then what a person has to do is make decisions based on that truth as they're standing before God."


God is the judge and the bishop says he is but a teacher.


Bishop Zubik also says he will open up all the churches on Monday – some around the clock – so people can come pray about how they should vote on Tuesday.


Also, please check out the interview with the Bishop by clicking here