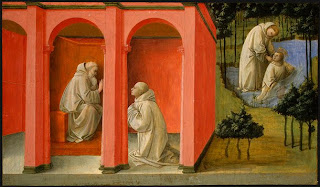 "Once while blessed Benedict was in his room, one of his monks, the boy Placid, went down to get some water. In letting the bucket fill too rapidly, he lost his balance and was pulled into the lake, where the current quickly seized him and carried him about a stone's throw from the shore.
Though inside the monastery at the time, the man of God was instantly aware of what had happened and called out to Maurus: "Hurry, Brother Maurus! The boy who just went down for water has fallen into the lake, and the current is carrying him away." 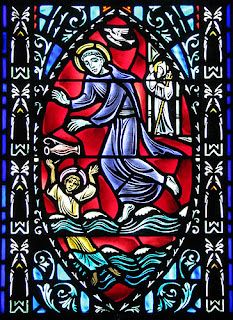 Maurus asked for the blessing and on receiving it hurried out to fulfill his abbot's command. He kept on running even over the water till he reached the place where Placid was drifting along helplessly. Pulling him up by the hair, Maurus rushed back to shore, still under the impression that he was on dry land. It was only when he set foot on the ground that he came to himself and looking back, realized that he had been running on the surface of the water. Overcome with fear and amazement at a deed he would never have thought possible, he returned to his abbot and told him what had taken place.
The holy man would not take any personal credit for the deed but attributed it to the obedience of his disciple. Maurus, on the contrary, claimed that it was due entirely to his abbot's command. He could not have been responsible for the miracle himself, he said, since he had not even known he was performing it. While they were carrying on this friendly contest of humility, the question was settled by the boy who had been rescued. "When I was being drawn out of the water," he told them, "I saw the abbot's cloak over my head; he is the one I thought was bringing me to shore."- Dialogues of Gregory the Great 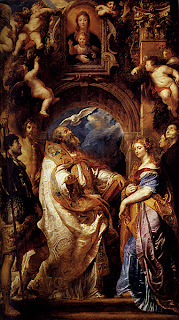 O God, Who through the holy Abbot Maurus didst spread the Order of Saint Benedict throughout France, and there increase and preserve it; grant us in Thy mercy the grace, that through the merits and intercession of this Thy faithful servant, and all the holy sons of Saint Benedict, the Order may also be spread in our days; and that we may imitate the virtues of Saint Maurus in such a manner, as to gain Heaven, where, in company with the blessed, we may praise Thee for all eternity. R. Amen. 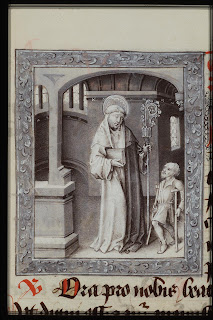