Mass at the Vatican

From: http://www.holyghost-byzantinecatholic.org
Americans today often have a twisted sense of giving. Because we are a nation of affluence, we are often exposed to countless pleas to give generously to every and all needy causes. And The approach so often used by various mediums of solicitation is to appeal to our sense of guilt at our having so much while others have so little. Obviously such a campaign works. But rather than giving of our heart to help someone in need, we so often give in order to appease our own guilt feelings. And once having satisfied our guilt, we can overlook the personal involvement of helping those whom we come in contact with on a day to day basis. But is this the true spirit of giving? Should we not give out of genuine love and concern for our fellow man rather than to satisfy our own needs and guilty conscience? And just as twisted is the notion that we should be “good Samaritans” because giving will make us “feel good” or give us reward and recognition. Is this why we should help others? Christ tells us to lend without expecting return (Lk 6:35). This does not mean that we shouldn’t give our time, talents and money. Christ tells us to lend, but our motivations is different. Either way, the cause will get its donation. But the difference between giving out of love for your fellow man or giving to satisfy personal motives is like the difference between doing something out of genuine love for your parents or out of fear of punishment for not doing it.
It’s the difference between being “Christ-like” or “self-centered.” Perhaps we know of no better example of the true spirit of Christian giving than our own St. Nicholas. Born around 275 AD in a town called Myra, St Nicholas “forsook the world” and entered the monastic life Because of his holiness and virtue, he was brought back to Myra and consecrated its bishop. While there, he was seized by the town magistrates, who were persecuting the Church, for zealously guiding and protecting his flock, and subjected to torture and imprisonment With the end of the persecutions brought about by the Emperor Constantine, St. Nicholas was released and once again took to the care of his flock. He is said to have taken part in the First Ecumenical Council at Nicea. After his death at a very old age, his body remains uncorrupted to this day and a sweet smelling balm is said to flow from his bones Several miracles are attributed to his intercession and hence he is called “Wonderworker” But, above all in his saintly life, St Nicholas is most renowned for his example of Christian giving Countless legends of his holiness and unselfishness exist One such story concerns a man who was so poor that he decided to sell his three daughters into slavery St Nicholas, upon hearing of this and under the cover of night, left money m the house and thus averted the tragedy He did this twice more before his discovery by the wretched man, who immediately sought forgiveness from St Nicholas Other legends include his arranging for the release of 3 unjustly imprisoned men and his saving 3 innocent youths from execution. There are other tales of his goodness, but the point of the matter is that St. Nicholas helped. others, not because he wanted to “feel good”, but because he truly loved his fellow man. In treating everyone as Christ would, he acted, not out of a desire to satisfy his needs, but out of concern for the needs of others He forgot any personal difficulties and hardships involved in order to try to alleviate the hardships of others This is the true spirit of Christian giving This is the true spirit of love of neighbor This is the spirit of St. Nicholas. His feast is celebrated on December 6. 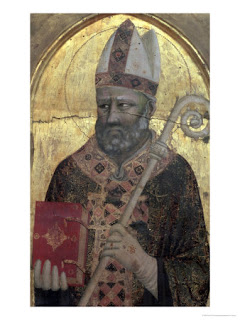 PRAYER O Saint Nicholas, bountiful Father and special Patron of our Byzantine Catholic Church. You are a shepherd and teacher to all who invoke your protection, and who, by devout prayer, call upon you for aid. Hasten and save the flock of Christ from ravenous wolves; and by your holy prayers protect all Christians and save them from worldly disturbances, earthquakes, attacks from abroad, from internal strife, from famine, flood, fire, sword, and sudden death. As you had mercy on those three men in prison and saved them from the king's wrath, now also have mercy on me who by word, deed, and thought have sunk into the darkness of sin, Save me from the just anger of God, and from eternal punishment. Through your intercession and aid as well as through his own mercy and grace, may Christ our God allow me to lead a tranquil and sinless life, and save me from standing at "his left," but deem me worthy to stand at "his right" with all the saints. Amen.
Posted by SVA V-Team at Monday, December 06, 2010 No comments:

Our sister's at St. Emma Monastery have launched a new blog for women discerning the monastic way of life in the Benedictine tradition.  Check it out. (Click on pic)