I found this great piece of St. Vincent History on the Catholic Answers website, of course we have the original here at the Abbey but it is great to see others sharing the life and mission of our founder Archabbot Boniface Wimmer, OSB: 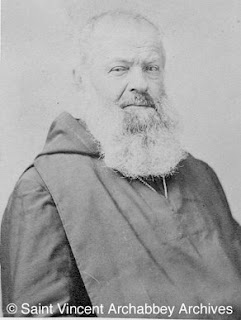 Wimmer, BONIFACE, archabbot, b. at Thalmassing, Bavaria, January 14, 1809; d. at St. Vincent Archabbey, Beatty, Pennsylvania, December 8, 1887. He made his Classical studies at Ratisbon and entered the University of Munich, to study law. When some scholarship fell vacant in the Gregorianum he took the competitive examination with a view to studying for the priesthood, and, having won a scholarship, he finished his theological course there and was ordained on August 1, 1831. After serving one year as curate at Altotting, a well-known place of pilgrimage, he entered the Abbey of Metten, where Benedictine life had just been restored through royal favor, and made his solemn vows on December 27, 1833. For several years he lived the common life of obedience, and during that time he became interested in the matter of foreign missions. Reading much about the neglected condition of the German immigrants in North America he finally made plans and took steps to transplant Benedictine activity into the United States. Several young men offered themselves to him as candidates; in a characteristic letter he explained to them the difficulties and the sacrifices incidental to the undertaking and asked them to withdraw their application unless they were willing to carry with him the cross of absolute self-sacrifice and to make the will and the glory of God their sole motive in the undertaking.

With five students and fifteen brother candidates Boniface Wimmer arrived in New York (September 16, 1846), where several well-meaning priests did their best to persuade him to abandon his plans, but their prophecies of certain failure did not discourage him. He went to the Diocese of Pittsburgh, and accepted some land which Father H. Lemke, for years associated with the Rev. Prince Gallitzin, had offered him. Conditions here in Carrolltown, proving unfavorable for the undertaking, he moved to a place forty miles east of Pittsburgh and accepted from Bishop O'Connor the location where St. Vincent Archabbey, College, and Seminary stand today. Under innumerable difficulties the new foundation slowly grew and prospered. The Louis mission society and several friends and benefactors helped the cause with pecuniary means. The school and the seminary were visibly blessed in their efforts, and the monastic community did much good by looking after the religious interests of the scattered settlers, and organizing them into parishes. Calls for German-speaking priests came from all sides and many bishops offered to the growing Benedictine community German parishes for which they could not provide suitable priests of their own. In 1855 Father Wimmer became the first abbot of the monastery. 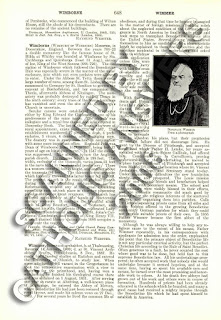 Although he was always willing to help any religious cause to the extent of his means, Father Wimmer repeatedly, in his correspondence with applicants for admission into the order, emphasized the point that the primary object of Benedictine life is not any particular external activity, but the perfect Christian life according to the Rule of Saint Benedict. Often generous to a fault, he never counted the cost where good was to be done, but held fast to this supreme Benedictine law. All his undertakings prospered; he often accepted work that nobody else would undertake because it seemed hopeless, and at the same time, having so spent his available men and means, he turned over the most promising and honorable work to others. At his death five abbeys had grown out of his work and others were in course of formation. Hundreds of priests had been already educated in the schools which he founded, and many a good cause had received a mighty impulse through the Benedictine life which he had spent himself to establish in America.
WALTER STEHLE

Click here to listen to an achieved mp3 of Father Boniface Hicks, OSB on "The Inner Life" 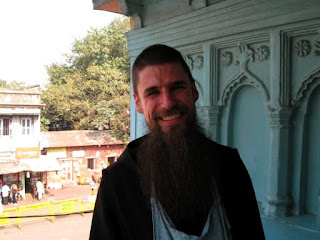 Father Boniface working with the poor in Calcutta, India with the Missionaries of Charity.
Posted by SVA V-Team at Thursday, April 16, 2009 No comments: