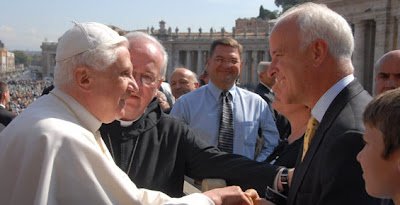 Here is President Towey's Blog entry which appeared on our college's website (the next day, Sept. 25), it seems appropriate to post as we gear up for the celebration of Archabbot Boniface's 200th birthday celebration!!! 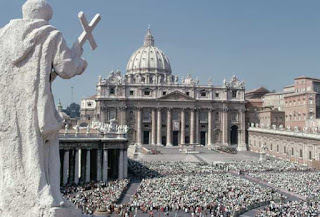 Yesterday in Saint Peter’s Square when His Holiness Pope Benedict XVI and our very own Chancellor Archabbot Douglas embraced and conversed about Boniface Wimmer, two of the most venerable traditions of the Church embraced: the papacy and Benedictine monasticism.


While all of you were asleep, Saint Vincent College took center stage in the Eternal City.


Under a crystal clear sky and with thousands of pilgrims from scores of countries in attendance, as well as three of Saint Vincent’s monks and a group of alums and pilgrims, your alma mater marked one of its proudest and most historically significant moments.


Perhaps you know the story of Saint Vincent’s earliest days. It is worth recounting. A German Benedictine monk, Boniface Wimmer, traveled the Atlantic Ocean with 18 companions and in 1846 established the first Benedictine college in America on what would become our campus.


In January the College will celebrate the bicentennial of Father Abbot Wimmer’s birth. It is not possible to recount our college’s history and ignore the miraculous work of grace that has sustained us these 162 years. I speak often of the hardships and sacrifices of the Benedictines in those early years because they gave their lives for us.


Think of the prayer and labor that was asked of the Benedictines who built the Basilica brick by brick at the turn of the century, or in more modern times, when a good bit of the campus burned to the ground, forcing so many Benedictines to actually work and sleep in their offices (trivia: it was during this time that both Bonnie and Gerry halls were hastily built). Today we enjoy a campus of unparalleled beauty and unprecedented prosperity because of these Benedictines as well as their successors – and the many lay men and women who have processed through the decades to come and labor by their side as faculty, administrators and staff.


I love listening to alums tell stories about the old days. The more I hear, the more blessed I feel to be joined to Saint Vincent’s proud history. As I watched the Holy Father receive a beautifully bound edition of some of the letters of Boniface Wimmer from our Archabbot, I witnessed another chapter in that history being written.


I had a chance to meet the Holy Father a few moments later and convey the love and gratitude of the entire College community - so if you felt a surge of grace around 5 a.m. yesterday, it was his apostolic blessing being conferred upon the entire campus!


He congratulated our football team for winning our first game in 46 years and asked if Dan Brett was still SGA president. Ok, I made that up.
But the rest, though dreamlike in its improbability and majesty, is true. Our students who went with Fr. Vincent in April to the Papal Mass in the Bronx know what it means to see the Holy Father in person. It is as if you are transported back to the time of Christ, to the company of Saint Peter and you hear those immortal words: You are Peter and upon this rock I will build my Church!


An unbroken chain of succession stretches from Saint Peter to Joseph Ratzinger. It is a deep mystery. There is no human explanation for how the Church is still standing two millennia later despite all of the efforts from within and without to topple it.


And today’s vicar of Christ - who like 15 of his predecessors took the name of the saint that inspired Boniface Wimmer, his companions, and their Benedictine successors in the foothills of the Laurel mountains – now knows about the marvel that is Saint Vincent College.
Posted by SVA V-Team at Friday, December 12, 2008 No comments: